Revising politics in Attack of the Clones

In my article for the Far, Far Away Radio blog, I mentioned that many critics attacked the political scenes in the Prequel Trilogy. I had mentioned that the Prequels sometimes failed to connect the political story with the characters' arcs. Of course, criticizing is one thing; doing is another. So, as an intellectual exercise, I thought I would take one political scene from Attack of the Clones to see if I could retain the substance of the scene but add more of a character moment.

As an example, I took the scene from AOTC in which Anakin and Padmé frolic in the fields of Naboo and talk about the benefits of democracy versus dictatorship. Here is the dialogue from the AOTC script:

ANAKIN: I like two or three, but I'm not really sure about one of them. (smiling) I don't think the system works.

PADME: How would you have it work?

ANAKIN:  We need a system where the politicians sit down and discuss the problems, agree what's in the best interests of all the people, and then do it.

PADME:  That is exactly what we do. The trouble is that people don't wlways agree. In fact, they hardly ever do.

ANAKIN:  Then they should be made to.

PADME:  By whom? Who's going to make them?

ANAKIN:  I don't know. Someone.

ANAKIN:  Of course not me.

PADME:  That sounds an awful lot like a dictatorship to me.

[A mischievious little grin creeps across his face. ]

It's not a bad scene. There's a lot I like. I've heard people express sentiments very similar to Anakin's in real life, in Indonesia for example where some express fondness for Suharto's New Order regime (see my earlier article for more about the Indonesia-Star Wars comparison). 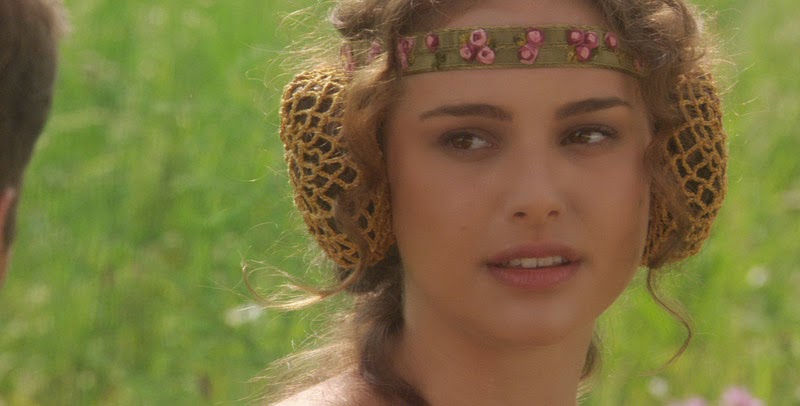 However, I have heard many complaints about this scene, and I think I understand them. We never really get any motivations for either Anakin and Padmé's views. In fact, one could imagine that they would have come to the opposite conclusions. Anakin was a slave, so he should appreciate the value of freedom. Democracy failed Padmé in The Phantom Menace when the Galactic Senate refused to intervene. The characters' viewpoints are written to service the plot, but what does the plot do to the characters themselves?

ANAKIN: I like two or three, but I'm not really sure about one of them. (smiling) I don't think the system works.

PADME: Of course it has its problems. Don't you think I was frustrated when the Senate didn't intervene to help Naboo against the Trade Federation. But what's the alternative? Dictatorship?

ANAKIN: If it means that we get decisive leadership, then who cares what you call it?

PADME: Don't you understand what that means? Under a dictatorship, we'd lose all of our rights. We'd effectively become slaves to whoever is in power.

ANAKIN: Democracy hasn't done much to stop slavery. You know how many corrupt politicians profit from the slave trade!

PADME: Anakin, did the Jedi Council ever approve your request to rescue the slaves on Tatooine?

[Anakin, voice softening slightly, looking down as if ashamed to stare Padmé in the face after his outburst]

ANAKIN: The Council says the Senate has to authorize any mission. The Senate says Tatooine lies outside Republic jurisdiction. [Pause] If we just had somebody who could make all the Senators agree...

PADME: Who? Who's going to make them?

ANAKIN:  I don't know. Someone young enough to be free from corruption, but powerful enough to push through reforms.

[A mischievious little grin creeps across his face. ]

ANAKIN:  What, you don't like the sound of "Supreme Chancellor Skywalker"?

What I tried to do here is show through the dialogue how both characters arrived at their convictions. Anakin cares that the system is broken because it frustrates his goal of freeing the slaves (remember his promise in TPM), and by implication his mother. Padmé clings to democracy because, to paraphrase Winston Churchill, democracy is the worst form of government except for all the others. Padmé worries that a dictatorship would undermine human rights. Anakin sees rights being violated and thinks stronger government is needed to protect people. Their concern about politics transcends the abstract and is deeply ingrained in their characters.

Moreover, as a character moment, Padmé sees Anakin's anger, but also understands its roots (his childhood as a slave, concern for his mother, etc.). When he brings up slavery, she refuses to respond in kind and turn their conversation into a political debate. Rather, she shows him kindness. That's why Anakin's relationship with Padmé is so important: she can steer him from the Dark Side by getting to the root of the problem, whereas Obi-Wan and Yoda can only address the surface issues with Jedi platitudes.

Writing a good script is hard. I'm not claiming I'm good or that my rewrite is better than what actually appeared in the movie. I just thought it would be worth playing around with different ways of combining politics and character in Star Wars. Like my revisions or not, I found this to be a healthy thought exercise to make sure I'm not simply playing "Monday morning quarterback" when I engage in critical analysis of politics in the Star Wars films. If you have any thoughts, please feel free to share in the comments.
Posted by Enjolras at 7:18 AM

Email ThisBlogThis!Share to TwitterShare to FacebookShare to Pinterest
Labels: Attack of the Clones, Far Far Away

Enjolras
Enjolras is a political scientist and Star Wars fan – although not necessarily in that order. He conducts research in countries with dictators as evil as Palpatine and legislatures as corrupt as the Galactic Senate.